It’s been in the papers in the UK recently stating that modern mums make up to nine meals a day for fussy eaters in their family. You can read the article here.

I was watching Loose Women earlier this week when one of the presenters admitted to recently driving her 17 year old to McDonalds in Cyprus because she, the daughter, didn’t want to eat hotel food. Apparently her daughter only eats chicken nuggets, French fries, smiley potato faces and a handful of veggies – broccoli and sweetcorn – and everything with ketchup. That doesn’t sound very healthy and yet this mother was giving into her 17 year old – not really a child anymore!

So who is to blame for children being fussy eaters? Is it a habit they develop as young infants? Is it psychological? Is it a call for attention? Is it just a taste bud thing? 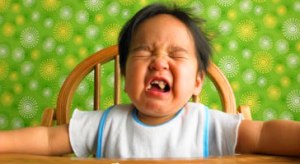 According to the Royal College of Psychiatrists (RCP), children under five being “fussy” eaters is just normal development behaviour at that age and that 1 in 3 under fives practice refusing food and selective eating. The RCP assures us that most children will grow out of this fussy eating behaviour.

How can we encourage children to eat healthy as well as be open to a variety of different foods? Here are some tips and tricks:

1) When you start weaning your child, introduce them to as many different tastes and flavours as possible. Research has shown that if you introduce your child to a wide range of flavours at that age, they are more likely to accept them. Usually only 4% of new foods are accepted after the age of two.

2) Remember, all children are different, have different taste buds and no child can like everything and anything offered to him/her. S eats 15 different fruits but won’t touch raspberries (which I love). Usually when they get to 2-3 years of age they will start developing their “favourite” foods and often foods they previously ate they won’t enjoy anymore. This is all part of their development. Sometimes they’ll take a piece of food, smell it, taste it and put it down. In some instances they’ll use refusal of food as a tactic to get your attention. As long as your child is healthy and generally eating well, I wouldn’t worry if they ate a little less than they usually do at one or two meals.

3) TEETH!! I put this in caps because we are going through it at the moment (and it’s not easy of children!!). S has 3 molars coming out simultaneously which means he has gone off most food. If your child is teething, under the weather or recovering from a virus, chances are they won’t have much of an appetite. It’s best to just wait it out, offering them rusks, carrot sticks, rice cakes and water until they are feeling better.

4) If possible, try and eat your meals together as a family. Children are often less reluctant to try new foods if they see everyone on the table eating it.

5) Try not to stress about it too much. If you are spoon feeding your child, they can often sense your anxiety and shut down, refusing to eat what you are offering them.

6) If you think your child is not getting enough nutrition from their limited diet then consider supplementing their diet with vitamin drops. It is important for children to be getting enough calcium and Vitamin D (esp. if they live in countries where you don’t seem the sun much) to prevent diseases like rickets and osteoporosis.

7) If all else fails and you’re worried they are not eating enough then “trick” them. There have been a handful of times my son has been fussy and I give him his food mixed in with a bit of yoghurt. He eats it all. On another occasion I used pieces of grapes (he loves fruit). So I’d show him the grape then pop it on top of his food on the spoon and feed him. He’d eat it.

8) I’ve found that as children go through different stages in development, they like to express their independence. So often, it is not that they don’t want to eat, they just don’t want to be spoon fed. Try offering them foods they can pick up and eat themselves.

9) When your children are old enough, take them to the supermarket with you and involve them in the shopping process. Hopefully as they get involved choosing vegetables they like, they’re more likely to eat them.

It can be really worrying for parents with fussy eaters, esp. if they are underweight or not getting enough nutrition. For more information on how to cope with fussy eaters, the Super Nanny website has some great tips here as does the NHS website.

Personally I think if your child doesn’t eat what is on their plate and you keep whipping up different things, they’ll get into the habit of knowing they don’t have to eat what you first offer. (This is of course applicable to toddlers and not very young babies). If this happens once in a while its fine but on a regular basis, you’re asking for trouble. Create healthy eating habits from a young age, exposing them to all sorts of food and hopefully this will stay with them through their lives.

5 thoughts on “Who’s to blame for fussy eaters?”