I’ve spent a lot of time in India in my life. I went to nursery in Mumbai for a few months when I was 4, I went to boarding school in Panchgani for 3 years when I was 11 and I’ve visited almost every year since I was 14. So the things that shock most people visiting India don’t really shock me anymore. As sad as it sounds, you become accustomed to the poverty and the dirt. Seeing helpless children always tugs at my heart strings but it doesn’t have the same shock affect as it did when I was younger if you know what I mean.

Now that I’m visiting with S though, there are many things I pick up on that really surprise me. The most recent being lack of friendliness. I find it hard to believe that people here aren’t friendly but over the last week we’ve been visiting my maternal grandmother in Pune and S being the friendly child that he is, says hello and waves at everyone (and I mean everyone!). But no one (especially other children) says hello back!!

Yesterday we went to this huge mall called The Pheonix and they had a train going round the ground floor. It stopped at one point about every 5 minutes and you could pay to have a go on it. S loves trains and so when it came round, we paid the equivalent of £1 each and got on. As we were driven around, he waved and excitedly said hello to everyone we passed by and I think 1 out of 10 people smiled or waved back. 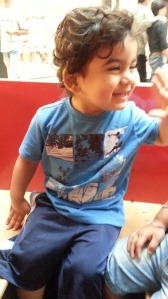 Is S just over-friendly? Are children here just shy? Or taught not to respond to anyone they don’t know? I’m open to explanations…