I was at the playground the other day when I saw some early teen boys swinging while holding on to a round metal disc that was suspended 8ft in the air. My first reaction was “that’s crazy!” (they were swinging almost parallel to the ground, going very fast and then just jumping off) until a few seconds later when I thought “Actually, I would have done something like that at that age!” Until about the age of 16, I was quite the tom boy.

So where do our fears come from? I always refer to S as such a daredevil. He’s fearless and such a stuntman on his little motorbike. Is fear genetic or are our fears based on our experiences and the influence of those around us? And if I didn’t encourage him to be fearless, would he be more fearful?

I did a little research and can tell you that fears aren’t genetic. Monkeys born in the wild are afraid of snakes — a useful asset for their survival. But monkeys raised in a laboratory don’t react when they see a snake, whether it’s poisonous or not. Source

It would appear that our fears mainly come from our past experiences and the influences of those around us. As a child, if we watch our mother react badly and with fear when she sees a dog, we will most likely grow up fearing dogs. You’ll often hear parents say “Don’t run, you’ll get hurt” or “Don’t do that, you’ll fall”, “don’t wear that, everyone will laugh at you”, “don’t swing too high, you’ll fall off”. All it takes is a comment, a glance, one moment, to start instilling fear in our children.

I have an irrational fear of sharks…I can’t remember at what age in started but I can pretty much freak myself out in a dark swimming pool imagining there’s a shark. I’m guessing it came from watching a scene of JAWS and other shark attack movies at a young age. Just looking at the picture below makes me shiver!! 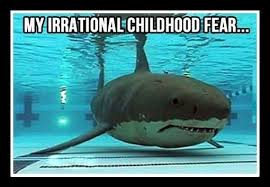 So how can we make sure our children don’t imbibe our fears? Quite simply I think it comes down to watching our reactions and watching our words. We can feel fear but not show it to our children. By watching our words and forming sentences in a different manner, we can let them know of the potential dangers of what they are doing without making them feel the consequence is a given. So if your child is running along the pavement you can say “Be careful running along the pavement because there are cars driving by” instead of “Stop running or you’ll get hit by a car”.

Here are some interesting related videos: