Earlier this year while my mom was browsing online, she found a deal for a family pass to Gulliver’s Land. It didn’t expire until the 31st of October and so we figured we had the whole summer to go.

But then life gets busy and each weekend it’s one thing after another and before we knew it, it was the end of October and we hadn’t been yet!! Luckily Gulliver’s Land’s Halloween coincided with S’s half term and so we planned to go on the 31st of October (talk about leaving things till the last minute!!)

But oh how it was worth it. The sun god’s decided that they weren’t ready to leave us yet and although we were practically in November, the sun shone!! It was a beautiful 21 degrees, perfect weather for a whole day out doors.

The whole park was decorated spookily and all the staff got in on it too. A few years ago I spent Halloween night at Ocean Park in Hong Kong. Their spook factor was high up on the scales of all things eerie. But considering Gulliver’s Land is a children’s theme park, they got it quite right. 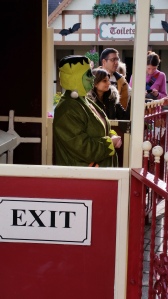 What I loved about Gulliver’s was the fact that it was fully equipped for toddlers. The rides were short so queues were manageable. They were thrilling but not over the top. Some rides had 2 queues – 1 for a slower version of the ride and 1 for a faster version. They had lots of rides the children could “control” like trains and cars. I’d recommend waiting until your child is 90cm as that is the minimum height for most rides.

S went on his first roller coaster which he loved, the magic carpet ride, a hot air balloon ride, the tea cup ride, the log ride and the runaway train to name a few. I put my foot down when he said he wanted to go on the Viking ship…even I’m scared of that!! 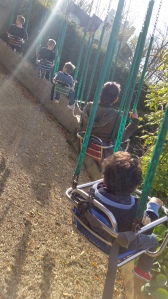 They had a couple of outdoor play areas, a couple of cafes and some good ol’ bumper cars.

I reckon we’ll get one or two more summers in before he thinks he’s far too grown up and wants to go to Thorpe Park instead!! Maybe we’ll try the splash zone next time since  he loves water parks!! 😉

**warning** While this ride looks fun – a leisurely peddle, taking in the views as you ride 20ft above the ground…let me tell you…if you’re riding with a toddler who isn’t going to help, this ride will feel like you’ve spent 45 minutes at the gym!! On the other hand, if you’re looking to tone your glutes, go for it!! Don’t say I didn’t warn you!