S absolutely loves racing and anything that involves cars, bikes and speed. When he was 18 months old my brother bought him a very sturdy plastic bike and even at that age he’d perform stunts. Using his legs to gain speed and then leaning his chest against the front of the bike and putting his legs up in the air! I’m pretty sure that’s when I started sprouting grey hairs!

He’s 3 yrs and 7 months and has long outgrown this bike but it is still one of his favourites. He now rides a scooter in the park and flies around our square on his bicycle! So when my friend mentioned Rye House Go Karting in Enfield, the place Lewis Hamilton apparently raced around, I couldn’t wait to take S.

We planned last weekend in advance, booked our 15 minute slot a few days prior and we were up and out of the house at 8:30am on a Sunday morning! The things we do for our kids…

It took us about 50 minutes to get there, without much traffic on the road at that time. My friend’s husband is a racing fan as well and had bought the boys some really cool official racing gear although Rye House does provide you with suits. The kids were then fitted with massive helmets which S refers to as a space helmet because they look so huge on their little bodies. 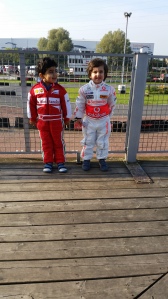 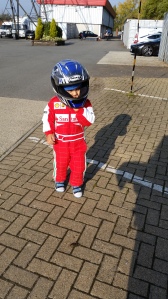 They got to spend 15 minutes on the track although S very skillfully swerved around the track masters to have an extra 2 rounds. I have to say, I was slightly surprised at how slow they went (the only other option is the  faster tracks for older kids and adults which S is obviously not ready for) but he absolutely loved it and thought he was going *very* fast!! That is all that’s important I guess.

We paid £15 for 15 minutes and although he didn’t go as fast as he thought he was going, he thoroughly enjoyed the experience. It’s a great place to introduce kids to the world of tracks and racing and as they get older, they’ll be more confident moving up to a faster kart and then onto the faster tracks.

Rye House are open to hosting birthday parties and they have a wonderful race themed cafe with an open balcony to watch the faster karts whiz by. 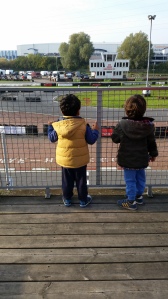 I’m not sure how often we’d make the trip up to Enfield but Rye House Tracks is definitely on our list of days out, close to London.